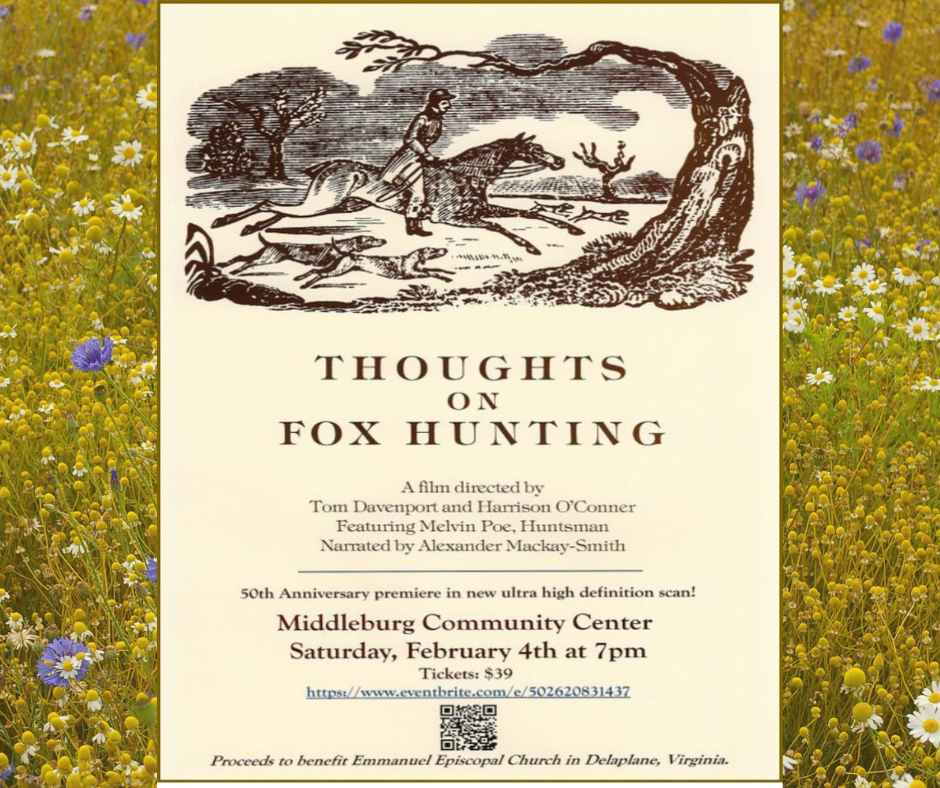 “Thoughts on Foxhunting” and Other Films

The Friends of Emmanuel Episcopal Church and Folkstreams.net will celebrate the golden anniversary of the film, Thoughts on Foxhunting with a special showing on Saturday February 4, 2023 at 7 pm at the Middleburg Community Center.

The 1972 production by filmmakers Tom Davenport and Harrison O’Connor was funded by the late Paul Mellon and the National Endowment for Humanities. Legendary foxhunters Melvin and Peggy Poe and the hounds of the Orange County Hunt near The Plains, Virginia are featured. The film provides a representation of the sport during the 1970s which includes the Poes working with and training the hounds, known as the “ring neck reds” near the kennels. The film features exciting chase scenes in an extremely challenging sport.

The narration is excerpted from Lord Peter Beckford’s 18th century classic “Thoughts on Hunting,” and edited and delivered by the late equestrian sports scholar, Alexander McKay-Smith. The story opens with a rare kill scene of a grey fox. That scene has made the film controversial with some who fear repercussions from animal rights advocates who led the campaign to successfully ban fox hunting in the United Kingdom. Octogenarian filmmaker Tom Davenport will present the film and speak about how it was made.

The event will premiere a new 4K high-definition scan of the original 16mm film. Proceeds from the show will benefit the general operating fund for Emmanuel Church in Delaplane, Virginia.